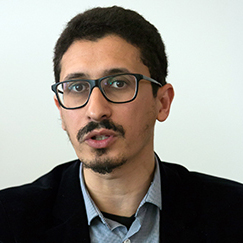 Prof. Mohamed Chetouani is the head of the PIRoS (Perception, Interaction et Robotique Sociales) research team at the Institute for Intelligent Systems and Robotics (CNRS UMR 7222), Sorbonne University. He is currently a Full Professor in signal processing and machine learning for human-machine interaction. His activities cover social signal processing, social robotics and interactive machine learning with applications in psychiatry, psychology, social neuroscience and education. He is the Deputy Director of the Laboratory of Excellence SMART Human/Machine/Human Interactions In The Digital Society.  Since 2018, he is the coordinator of the ANIMATAS H2020 Marie Sklodowska Curie European Training Network. He is the local co-chair of IEEE ICRA 2020 (Paris) and Program co-chair of ICMI 2020 (Utrecht). Since 2020, he is the President of the Ethical Advisory Board of Sorbonne University. 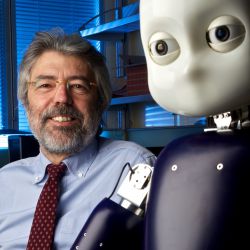 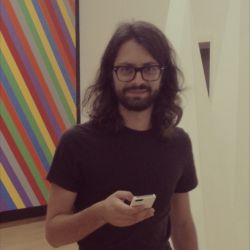 Alessandro D’Ausilio studied Experimental Psychology and obtained a Ph.D. in Cognitive Psychology from the Sapienza University of Rome (2007). During his Ph.D. he spent extended research periods both at MIT (Brain and Cognitive Science Department, McGovern Institute for Brain Research) and the Eberhart-Karls-Universität in Tübingen (Institut für Medizinische Psychologie und Verhaltensneurobiologie). Soon after the Ph.D. he received a three-years postdoctoral fellowship at the University of Ferrara (Section of Human Physiology). He later joined the Italian Institute of Technology (IIT) in Genova, first as a Senior Post-doc and then since 2012 as a Researcher in the Robotics, Brain and Cognitive Sciences Department. In 2016 he moved to the IIT Center of Translational Neurophysiology (CTNSC), hosted by the University of Ferrara. Alessandro D’Ausilio is currently Associate Professor of Physiology at the University of Ferrara (since 2017) and Visiting Scientist at IIT-CTNSC. Alessandro does research in Cognitive Neuroscience, Neurophysiology and Experimental Psychology. His preferred methods are TMS (Transcranial Magnetic Stimulation), EEG (Electroencephalography), MoCap (Motion Capture). He is interested in how predictive models of others’ behaviour might be shaped by the way we organise our own movements. The specific domains of investigation are speech, reaching-grasping actions, and their coordination in fast-paced multi-agent interaction (i.e. speech conversations or ensemble music coordination). 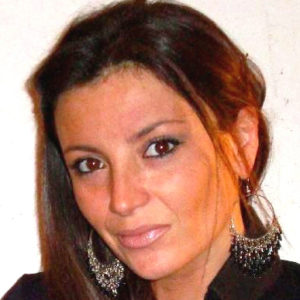 She is member of the Institute of Electrical and Electronics Engineers (IEEE) and of the EUCognition – European Society for Cognitive Systems (ID: 2037). She is also part of the IEEE RAS Technical Committee for Cognitive Robotics. She serves as Expert Reviewer for European Commission Framework Programme for Research and Innovation (Area: AI and Robotics). She is member of the PRISCA (Projects of intelligent robotics and advanced cognitive systems) Laboratory, making research in the fields of Cognitive Robotics, Artificial Intelligence and Social and Assistive Robotics, and of the QUASAR (Quantum Computing and Smart System) Laboratory, where she collaborates with experts of machine learning, quantum computing and smart systems. Additionally, she is affiliated to the ICAROS center (Interdepartmental Center for Advances in Robotic Surgery) of the University of Naples Federico II, aiming at creating synergies between clinical and surgical practice and research on new technologies for computer/robot assisted surgery.

To register to to the workshop, please fill the form on